Ryan Nicoll, Director of Engineering and co-founder of DSA, has received the 1906 Award from the International Electrotechnical Commission (IEC) for his tireless contributions towards the development of mooring standards for marine renewable energy applications. 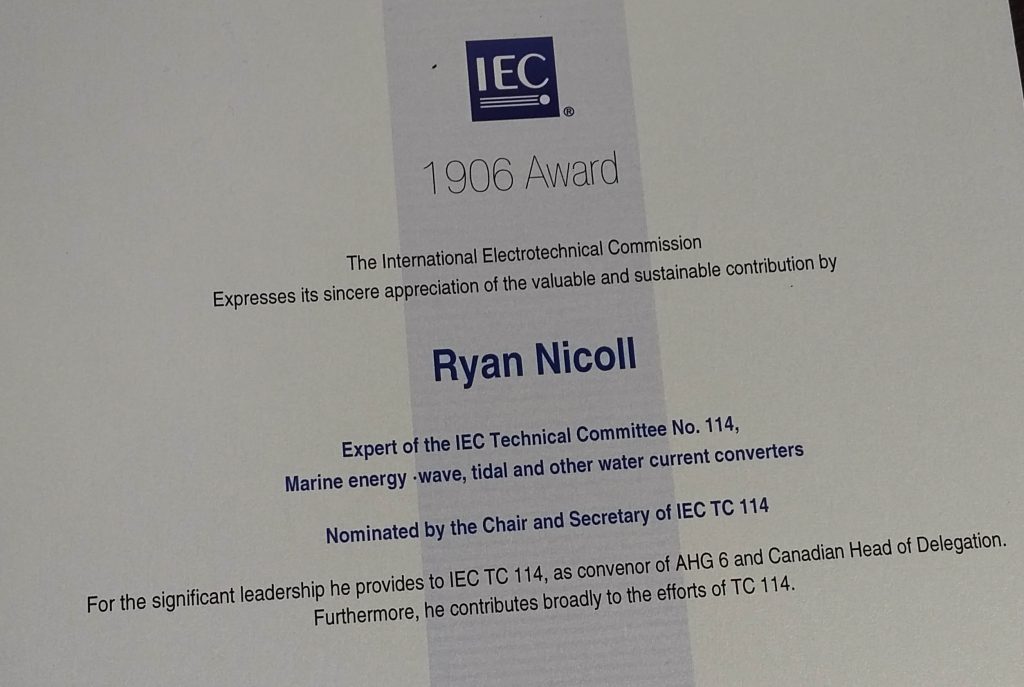 The IEC 1906 award was created in 2004 to commemorate the IEC’s year of foundation and to honour IEC subject matter experts. The award recognizes exceptional, and recent achievement by experts on a project or other specific contribution related to the activities of the IEC and which contributes in a significant way to advancing the work of the IEC.

The letter attached to the award reads;

Ryan Nicoll has been recognized for the significant leadership he provides to IEC TC 114 Marine Energy, as convenor of Adhoc Group 6 and as the Canadian Head of Delegation.

Furthermore, he contributes broadly to the efforts of TC 114.We would also like to take this opportunity to thank your organization for its commitment and support for Canadians participating in standardization activities, and in sustaining Canada’s national standards network.

A path to a sustainable future with standard development.

Imagine if you had to install a new driver when you joined every new wireless network. Or if you had to convert that new album to play on your phone, computer, and stereo—sounds somewhat frustrating, doesn’t it?

This is why international standards have been developed: they touch your life daily in the electronics you use, the buildings you live and work in, the food you buy, the bridges you cross, and in hundreds of other ways you may never notice. International standards ensure safe products and equipment, and they also help the spread and adoption of technology, bringing those resulting benefits to your everyday life.

The ocean covers over 70% of the planet and 44% of the global population live within 150 kilometres or 100 miles of the coastline, with more people migrating to these regions every year.

Producing renewable electricity from ocean waves and marine currents has the potential to play a pivotal role in creating jobs, reducing our greenhouse gas emissions, and putting us on a path to a sustainable future.

Still, as a relatively new industry, there are significant challenges with marine renewables. One way to help overcome these obstacles and spread innovation is through—you guessed it—creating international standards. Multinational and interdisciplinary volunteers from academia, government, and industry share and pool their knowledge and experience to develop these standards.

The International Electrotechnical Commission (IEC) has been fostering this process for over 100 years since it began pioneering standards for hydroelectric dams in the early 20th century. The IEC has specific groups that work on different types of electronics and electricity-producing equipment, and DSA has a role in Technical Committee (TC) 114, which focuses on marine renewable energy. 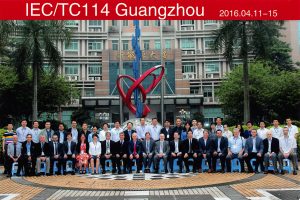 DSA, representing Canada, along with other international experts from Japan, Spain, Denmark, UK, USA, Korea, Ireland, France, China, Germany, and Israel, produced an IEC standard for the design of mooring systems for wave, tidal, and floating river energy converter technologies. This, along with other criteria like power performance assessment, power quality, acoustic monitoring, and so on, will help ensure new devices and power projects certified to IEC standards will be safe and reliable. 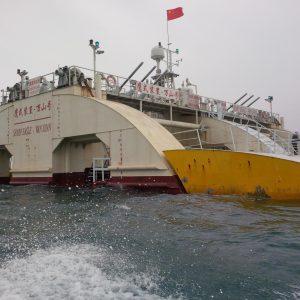 The Canadian government has recognized the abundant renewable energy resources Canada holds. This has led to Canada’s Marine Renewable Energy Technology Roadmap, which established targets for the Canadian sector to contribute projects totalling 75MW by 2016, 250MW by 2020 and 2GW by 2030 for installing in-stream tidal, river current and wave energy generation.With generous ocean wave, tidal flow, and river resources across the entire country, Canadians in every province will be affected positively as these new technologies help raise the standard for power generation.

DSA works closely with companies across Canada to develop sustainable marine renewable energy projects, from tidal energy in Nova Scotia, to Hydrokinetic testing in Manitoba and the West Coast Wave Initiative with the University of Victoria in British Columbia, near the west coast office of DSA.

We understand that the ocean is the heart of our planet and we believe renewable energy, especially marine energy, will allow us to create a more sustainable, low impact form of electricity to power us into the future.