The software is ready to go and login credentials for active subscribers will allow you to access ProteusDS v2.34 from our website.

The latest version of ProteusDS contains fixes and enhancements for net modelers. Improvements have been made to increase the accuracy of predicted hydrodynamic forces on nets, and mooring components in the wakes of nets.  The pre-existing wake-shielding model, which accounts for fluid velocity reduction through nets, has been updated and is considered essential for not over-estimating forces on successive net pens in simulations. This builds on the self-shielding model that was added in the previous release to account for local hydrodynamic shielding between adjacent net twines at low angles of incidence

Secondly, automatic adjustment of net twine drag coefficient with Reynolds number has been added as default to nets, and has been proven to accurately estimate hydrodynamic forces on nets over wide ranges of fluid velocity. DSA has produced a validation document which outlines the net model developments for estimating hydrodynamic loading and comparisons made to experimental tank tests of nets and full-scale fish farms. It is critical that net users add to their existing net model input models the $FluidCoefficientReData property.

Enhancements have also been made to the net arc space calculations in ProteusDS, which is used to position external masses on nets. Performance improvements were made by switching from a bi-quintic to a linear-cubic interpolation scheme.

The image shows a side view of three successive square aquaculture pens, with current flowing right to left. The leading cage experiences the largest hydrodynamic forcing and netting deformation. Current velocity is then reduced with the wake shielding model as the flow traverses through multiple nets, as seen in the middle and trailing cages.

Lastly, improvements have been made to previsualization of nets in the ProteusDS Simulation Toolbox. Users can now distinguish which net edge is which according to its colour.

Users can now distinguish which net edge is which according to its colour.

The finite-element cable model is one of the core models in ProteusDS. Users will now have the ability to automatically estimate a reasonable axial damping coefficient in cables based on a damping ratio, axial stiffness and element lengths. Testing has shown that this typically results in major simulation speed-ups.

Simulation execution time can be greatly increased by utilizing automatic cable damping, as each instance of a cable segment defined in a cable has a particular calculated axial damping coefficient based on the average element stiffness, average element length, and cable node mass covered by the cable segment.

The latest version of the ProteusDS contains a major new feature that allows control over the application current, wind and waves in a simulation. We’ve added the ability to independently control when the current, wind, and wave conditions will start in any given simulation and the length of time that those conditions will be ramped to their set state.

Previously the singular $TRamp property was used to control ramping of all environmental conditions. Users could not, for instance, have a steady state current with wind and then have waves start at some point later on in a simulation.

This feature is very useful when a user wants to determine an initial steady state configuration (positions and loads) for a model (e.g. a mooring system, a fish farm, a moored buoy) – then after the steady state is reached, introduce unsteady wave loads. Previously this level of analysis was only achievable after running separate simulations.

So, that’s ProteusDS 2.34 – we hope you enjoy it and find good use for all the new features.

We want you to fail. Virtually. So you don’t fail in reality. With Dynamic Analysis, you can reduce real-life failure.

With dynamic analysis, you can test your virtual prototypes; pushing your designs to their breaking point before going full scale.

But what is dynamic analysis? And what does it mean in the ocean engineering industry?

These virtual prototypes capture the dynamic response caused by the effect of wind, waves, and ocean currents. Easy to use software tools allow for much quicker design iteration and optimization compared to rules of thumb or rough calculations. Providing a swift and accurate analysis of the vessels and equipment’s response in various environmental conditions and reduces the need for physical prototypes and testing.

When you perform dynamic analysis, you reduce the risks and uncertainty of a project by considering the nonlinear and complex effects of current, wind and waves.

With dynamic analysis, you can apply industry best practices for installation and maintenance processes and explore design alternatives efficiency using an easy to use and flexible unified modelling environment.

At any stage of the project, virtual prototypes can be used to answer questions related to engineering design, planning, training, operations, and safety.

Some common questions our clients look to answer are;

With ProteusDS, users can create virtual prototypes of marine, offshore, and subsea technologies. For example, DSA recently led an ecoEnergy Innovation Initiative (ecoEII) and launched the ecoSPRAY system to gather data and verify the behaviour of floating tidal energy platforms and their moorings in high-energy turbulent tidal flows.

The NRCan ecoEII project is helping to reduce the cost of in-stream tidal energy through the development of comprehensive site assessment methods and technologies. Lessons learned from this project will help smaller and remote communities deploy smaller scale tidal energy systems and support them with their local equipment and capabilities.

The ecoSPRAY is deployed in Grand Passage between Freeport and Westport, NS, in the Outer Bay of Fundy. The Bay of Fundy has the highest tides in the world with current speeds that can reach up to 11 knots. With the help of ProtuesDS and its advanced finite-element capabilities, DSA was able to simulate the floating platform and mooring configuration before deployment. 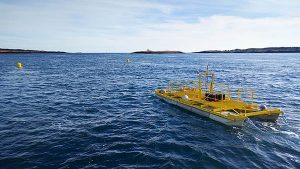 The ability to view and understand how a system will react is a significant advantage in any ocean industry. It allows you to plan and gain insight into how a system will respond to a wide range of conditions. Determining areas of potential problems will reduce project risk and assures that the design can withstand the extreme ocean conditions.

Dynamic analysis is used for a wide variety of marine industries including;

Interested in DSA’s ocean engineering numerical modelling expertise? A quick email to see if ProteusDS is the right solution for you is a great place to start.