In 1830, the Swedish Navy was reeling after a major continental war. Their fleet was decimated, with many of their wooden sailing ships lost or badly needing repair. Securing wood to rebuild and maintain their fleet in the future was a top priority. The Navy estimated they would eventually need 300,000 oak trees and immediately set to work planting them. It turned out they needed precisely zero.

Planting so many seemed like a reasonable assumption to help with supply in the future. Yet the particular oak trees needed are slow to grow and mature, and they weren’t ready to be used until 1975. But by then, the Navy didn’t need trees anymore because of technological transitions to steel ships. Still, nobody in 1830 knew what the future would hold, and with such long timelines involved, there was no getting around the guesswork involved.

Guesswork may come up when there’s lots of uncertainty. You try to make reasonable assumptions to help find a way forward and solve your problem. When it comes to floating systems, there’s often uncertainty on some aspects of hydrodynamics. The amount of motion damping caused by wave radiation can be an important question. However, with the right software tools, you can eliminate the guesswork using a straightforward process, and take a closer look at the effects of wave radiation. 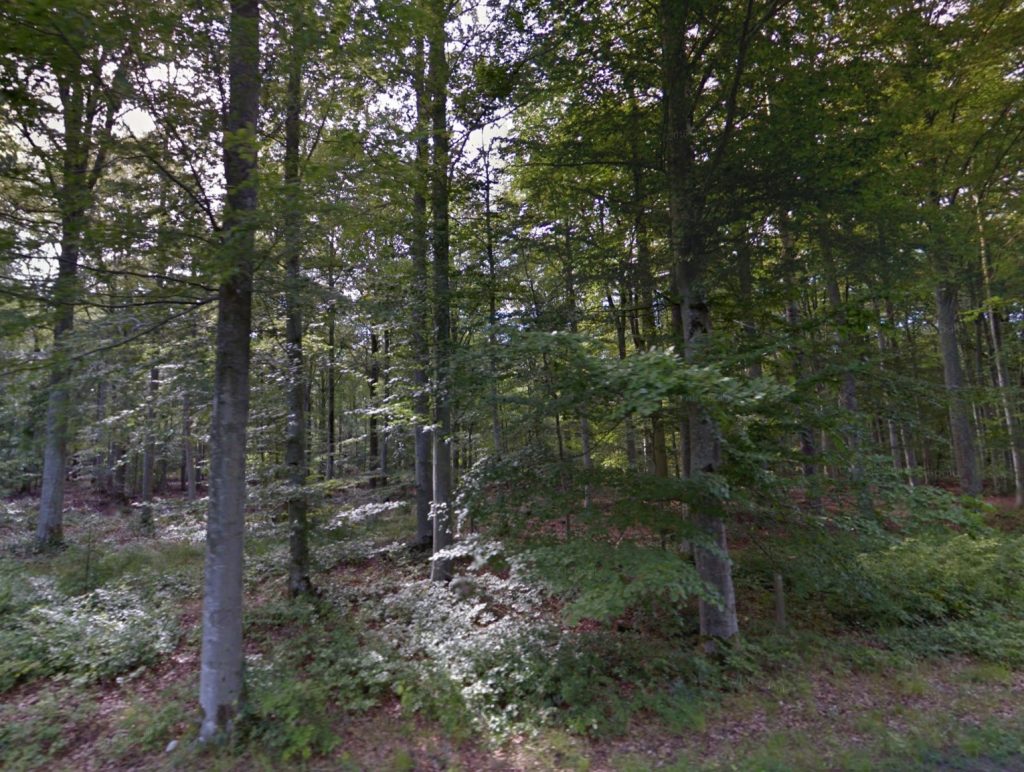 What are wave radiation forces?

When floating structures move in the water, they create waves at the water surface. These waves radiate away just like the ripples you see after dropping a stone in a pond. Wave radiation forces are the loads that act on the floating structure as these new radiating waves are created.

The ripples you see in a pond are waves radiating away from the splash. All floating structures radiate waves when they move in the water. But the important question is to figure out how much it affects floating system motions

Generally, added mass tends to be constant for completely submerged hulls far from the water surface. But near the water surface, the effect of radiating waves causes shifts in the magnitude of added mass. Further complicating things is that wave radiation may increase or decrease the added mass depending on how fast the structure moves around. This effect is sometimes called motion frequency-dependent added mass.

What about a more typical ship-shaped hull with a rounded bottom? Typically, in heave and pitch, they are excellent wavemakers, too. Like a barge, there’s often a lot of water displacement, and powerful wave radiation effects are possible. Essentially all the damping of ship and barge motion in heave and pitch will be from wave radiation. But the rounded hull produces an entirely different effect in roll. With very little water displaced as the ship rolls in the water, there aren’t many significant waves generated.

How are wave radiation forces calculated?

There’s no back-of-the-envelope calculation to estimate these effects. Suppose you expect a damped motion response of your floating system. In that case, it’s possible to model wave radiation with a linear damping effect. But the problem with this is that you need to know the nature of the damped motion response from experience and data. You will miss the frequency-dependent added mass effects, too. Without enough information, it might introduce a lot of guesswork to fill the gaps.

But instead of using experience and guesswork, there is a myriad of numerical tools available. One of the most common ways to resolve wave radiation effects is with a potential flow calculation that determines the interaction of a hull form with the water surface. These numerical techniques developed and used for many decades are helpful to resolve all aspects of wave radiation forces – including the damping and added mass effects – for many types of hull shapes. One example of a program that does this is ShipMo3D. ShipMo3D uses potential flow techniques to resolve the interaction of the hull with ocean waves, including radiated waves.

It’s time for an example

The Generic Frigate is a sizeable ship. At 120m in length, there is a lot of displaced water when the entire hull heaves or pitches in the water. So what do the wave radiation forces look like? Rather than focus on the forces themselves, let’s look at a heave decay response of the ship in calm water. This is a simple test that shows the heave motion of the ship after some initial displacement in heave. By far, the dominating damping effects in heave motion are wave radiation.

At 120m long, the Generic Frigate has strong wave radiation effects in heave and pitch motion

The heave decay response was calculated in ShipMo3D. The Frigate was offset by 1m out of the water and dropped. Even though 1m may not seem like much, in this configuration, the total ship displacement is 1000 tonnes, so it will take a lot to stop the oscillations. Yet a little more than 10 seconds later, wave radiation has damped out the heaving motion to a bit of a ripple. For this kind of hull in this particular motion, wave radiation forces are substantial. 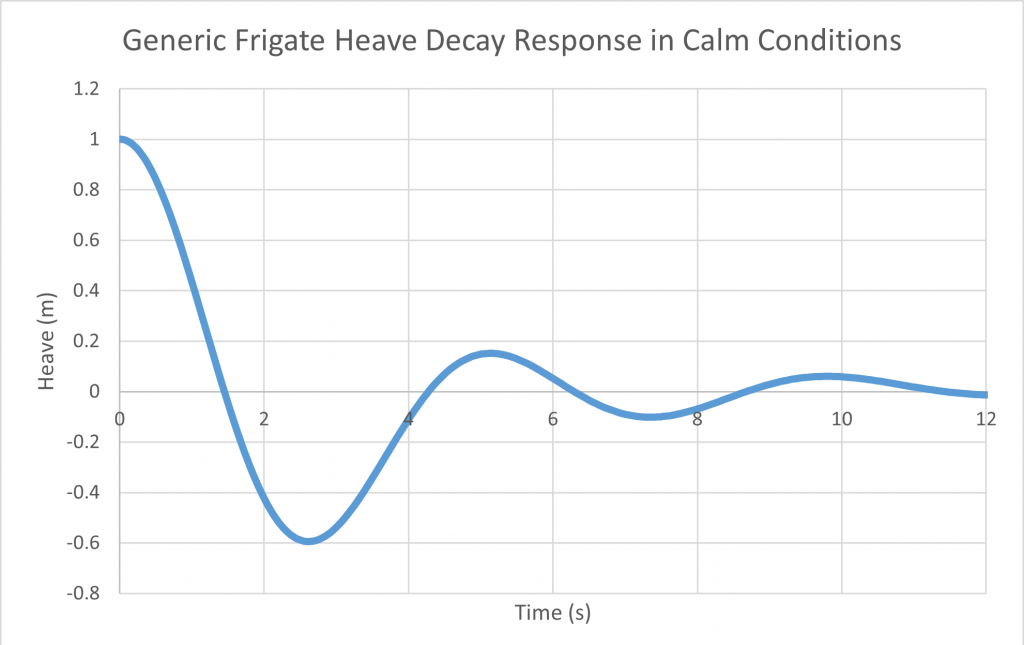 After only little more than 10 seconds, the multi-thousand-tonne Generic Frigate heave motion settles out from wave radiation forces. This shows the major influence wave radiation has on this particular hull shape in heave.

Floating systems moving in the water create waves. These waves radiate away from the hull and carry momentum and energy away. When this happens, the result is wave radiation forces that appear on the hull. Radiated waves may have strong damping effects and can also shift the added mass of a system. Generally, you can get an intuitive idea if wave radiation forces are significant if you expect the hull to be a good wavemaker. In other words, if a hull displaces a lot of water when in motion, much like a typical barge would be in heave or pitch. Wave radiation forces can be resolved in specialized software tools like ShipMo3D, but it doesn’t mean they need to be used for every problem. Still, it’s good to have options to reduce the amount of guesswork involved. But guesswork that goes sideways isn’t all bad. At least the Swedish Government now has a forest of 300,000 trees they can use as a national park rather than building Navy ships!

The oak trees on Visingso island in Sweden were cultivated to be particularly straight to make them better to use for shipbuilding. Take a closer look at Visingso forest in Sweden on Google Street View here.