Aerobraking can work well on paper in spaceflight dynamics, but if you’re not careful, it can end in disaster. Aerobraking is when a spacecraft deliberately flies through a planet’s atmosphere to adjust its trajectory. It’s not science fiction, either – the Venus Express spacecraft completed experimental aerobraking maneuvers in 2014. Aerobraking is a handy maneuver as it can save a tremendous amount of fuel when making significant orbital adjustments. But it requires careful planning.

The trick is to get close enough to the planet so there’s enough drag to cause an effect. Close, but not too close: without enough clearance from the planet, there is too much drag, damaging the spacecraft, or worse yet, causing a crash. Aerobraking requires careful control of this clearance.

In most circumstances, clearance is a buffer from disaster. Yet often, we are in circumstances where there’s no way around getting too close for comfort, so controlling clearance is crucial for success. Likewise, controlling clearance comes up with profilers on oceanographic moorings, too. In relatively shallow water areas, it’s a common goal to profile as much of the water column as possible. But wave-powered profilers won’t work at all if the downweight on the mooring comes in contact with the seabed. In this article, we’re going to cover several points controlling downweight clearance from the seabed:

Water depth is a crucial input to any mooring design

The more shallow the site, the more critical it is to know the depth accurately. It is double critical for wave-powered profilers in these conditions. If you want to profile a decent fraction of the water column, the downweight has to keep clear of the seabed, or the profiler will stop working.

It’s OK to start sizing out a mooring for a project with only a rough idea of the water depth, like chart data or measurements from a nearby site. But the closer that downweight is to the seabed, the more critical it is to measure the water depth at the deployment site itself accurately. Checking the depth ahead of deployment is good. Still, it’s also worth confirming the water depth at the moment of actual deployment. There’s no reason to deploy the mooring if something has changed at the site, and you can’t be sure the mooring downweight will be clear of the seabed. In most places, the water depth doesn’t change too much, but that’s not the only thing affecting the downweight clearance. This brings us to the second point affecting downweight seabed clearance on tidal effects.

The tidal effects are very site-specific

There may not be much tidal variation in water depth in many places. In this case, tidal variation might be accounted for with a meter or two of downweight clearance. But surprising things can happen, especially in coastal areas. Tidal cycles are many hours in length. Suppose the water level drops enough that the downweight is sitting on the seabed. In that case, you might end up with similarly many hours of gaps in your profiler data record.

Typically, there’s enough regional information on tidal height variation that you can gauge how much change there might be. Tidal changes take place over many hours, but they aren’t the only environmental factor to consider. This brings us to the last point affecting downweight seabed clearance on the effect of ocean surface waves. 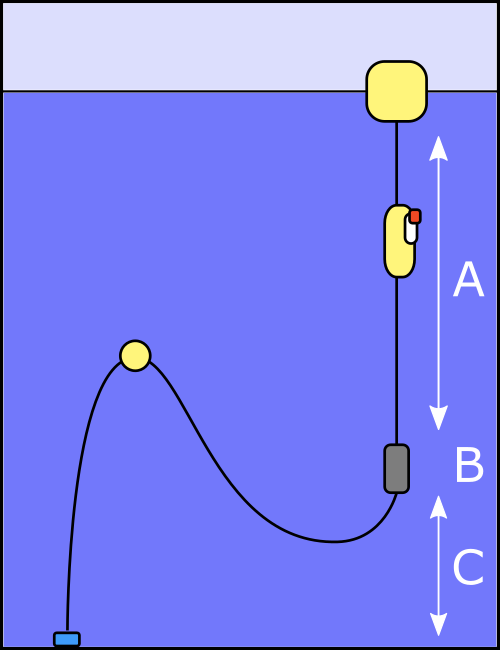 Like tidal effects, ocean waves will be very site-specific

Protected coastal areas may not have much in the way of wave action. On the other hand, fully exposed offshore locations may regularly see extreme sea states. The specific location, seasonal variation, and length of the mooring deployment factor into the size of sea state to expect at the profiler deployment location. Typically, a sea state is characterized by spectrum or at least a significant wave height. A quick way to assess the downweight clearance is to use a factor of the significant wave height.

A crude rule of thumb for a maximum wave expect in a particular sea state is two times the significant wave height. Since many profiler mooring buoys are lightweight and track the water surface closely in most sea state conditions, this can translate directly to downweight motion and the resulting effect on downweight clearance. Of course, this is a rough rule of thumb. Though a good starting point, you can always incorporate a more detailed check on the downweight clearance in a dynamic analysis program like ProteusDS Oceanographic.

Water depth, tidal effects, and wave effects must be accounted for when sizing up the downweight clearance from the seabed. The easy and conservative approach is to add up the impact of wave and tidal action on the water depth to ensure you have enough downweight clearance from the seabed. While this gives you a guideline to get started, it is the minimum clearance to consider. The consequence of losing data or damaging components has to be factored into the risk assessment for each project, too!

Read more on the final stages of the Venus Express mission, including the results of the aerobraking maneuver and new data produced from it here.