Manatees are sophisticated, high-performance swimmers. You might look at one of these cuddly blubberous hulks and think otherwise, but it’s true. By high performance, I don’t mean they are incredibly fast. Instead, it’s how they keep their ungainly bulk in control. Because they are so large, it would be a big challenge to rely on muscle power alone to navigate around. This is where Manatees have a trick up their sleeve.

They rely on the careful use of digestive gasses to keep the right balance in the water. It’s not all about flotation, either. Critically important for them is they use this gas to control their tilt, too. They have special pockets that hold these digestive gases through their intestines that enable this control.

Similarly, you will be faced with making corrections when you work on a design problem. Often, a design will get out of balance, and you need to make some adjustments. When it comes to subsurface mooring design, any amount of steady current can lead to significant mooring knockdown. In this article, we’re going to talk about correcting subsurface mooring deflection by adjusting:

All these parameters can affect knockdown. But they each affect knockdown differently, and it pays to consider them separately. First, we’re going to talk about adjusting flotation. 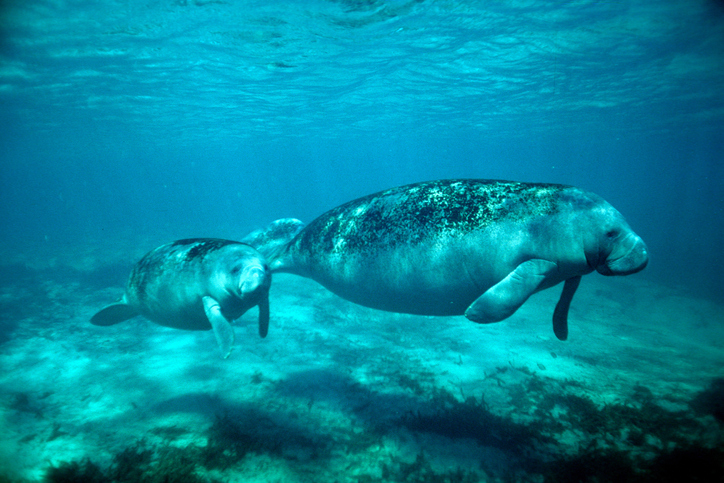 As a general rule, consider not swimming behind Manatees

You might think adding flotation is a brute force approach

But there are limits to the amount of flotation you can add. After all, working with larger and larger floats starts to get awkward and heavy to handle on a ship during mooring deployment. There is a cost factor too: larger floats are heavier and will be more expensive to manufacture and transport. So while it is a simple approach to use more flotation, there are certain practical limits. You may find that you need as much flotation as you can handle to reduce knockdown in your mooring deployment. So it’s good to be aware of what your practical limits for flotation are.

You might wonder about the drag force on the float itself, too. While this can be an important factor, there is a lot of nuances to float drag. Before considering the float’s drag, it is far more essential to consider the drag on the mooring line itself. This brings us to the second point: adjusting line size.

Mooring knockdown is proportional to the total amount of drag

And drag force is always proportional to the amount of structure area in the flow. Simply put, for mooring lines, this area is a factor of line length and diameter. You can’t do much about line length if you need to get sensors in a specific position in the water column. So that leaves line diameter to play with.

So what does it mean to adjust the line diameter? In a subsurface mooring, the line tension is often driven by how much flotation you’ve added to the mooring. If you are using a smaller line diameter, the same rope material will have a smaller minimum breaking load. Of course, you’ve got to make sure the line’s minimum breaking load is sufficient given the tensions you expect.

If you want to try a smaller diameter, you may need a different line material

There are lots of sophisticated fibre ropes that have incredible minimum breaking loads at smaller diameters. Higher performance ropes will come with a higher cost. But the cost of the line should be considered in the context of the entire project. Again, only a few millimeters in line diameter can significantly change knockdown, so it is worth investigating in the design stage to see what happens.

Knockdown is proportional to the drag on the mooring. But it also makes a big difference if certain portions of the mooring line are in areas of higher current than the rest. It’s rare to have a completely uniform current profile, especially in full ocean depth conditions. This brings us to the last point on sensor location in the water column.

Sometimes you can work around the problem

Every mooring is driven by requirements to make measurements in the water column. In some cases, there is some flexibility on where sensors can be located to make these measurements. If you know something about the current profile for where the mooring will be deployed, you can use this to your advantage about where to place sensors.

For instance, there are many different kinds of ADCP, each with their own capability to measure ocean currents over various distances. If you’re not constrained to a specific ADCP, you can choose an alternate instrument and make adjustments to where these sensors are located in the water column to measure current profiles.

Knockdown is proportional to the amount of drag, and drag is driven by current speed. If you can make measurements of currents from a distance out of the main flow, so much the better. Because there are so many options for ADCP, the trick is evaluating which is the right one that will work well enough for your mooring. However, there aren’t ways of measuring things like salinity or temperature from a distance, in which case there isn’t a way to adjust sensor location.

So how do I evaluate all these options on flotation, line diameter, and sensor location?

Calculating the drag on the mooring line from each design is a process. Drag is not an obvious calculation you can do in your head or on paper for most typical moorings. You can use a software tool like ProteusDS Oceanographic to lay out flotation size, line diameter, and sensor types in different current profiles and calculate the resulting knockdown. It’s a straightforward process to adjust each parameter and see the effect on mooring knockdown.

It’s time for an example

We set up three subsurface mooring configurations in ProteusDS Oceanographic to highlight the effect of making current measurements out of the main flow speed. We assumed a water depth of 3000m. A current profile representative of extreme open ocean conditions was used with a current profile of 1m/s at the surface, tapering to 0.5m/s at 1000m, and further to zero at the seabed.

The goal was to use ProteusDS Oceanographic to determine the float sizes such that the knockdown was less than 50m, and allowable tilt around 5 degrees. For simplicity, only the floats, 1/4″ mooring wire, and wet weight of the ADCP units were accounted for in the mooring layout. We selected float sizes based on the spherical ADCP models listed on the DeepWater Buoyancy website. 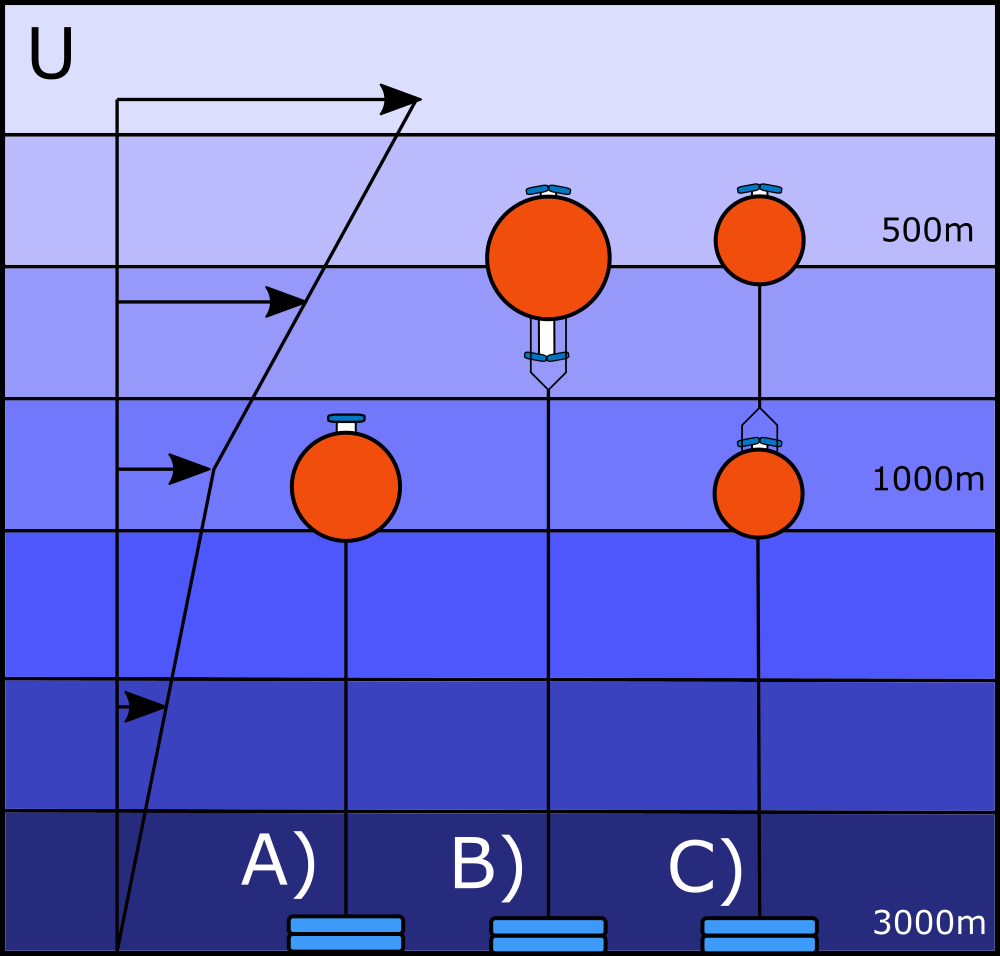 The results for each configuration were:

The results highlight how an ADCP with a longer measurement range, like the Teledyne Pinnacle, allows a mooring design with float and mooring out of larger currents. This reduces the total amount of drag on the mooring and the resulting knockdown. The other configurations needed more flotation or much larger floats to achieve the same knockdown requirements.

We covered a few aspects of correcting knockdown in a subsurface mooring design, and now it’s time to review. The first thing to work with is the amount of flotation. Increasing this should directly help reduce knockdown, but there are practical limits in cost and logistics, too. The next thing to review is line diameter. Even a few millimeters reduction of line diameter can make a huge difference, especially on longer moorings. It may mean using a more expensive line material, but it may be a small additional cost compared to the entire project. Finally, consider sensor placement and what you actually need to measure. If you can measure high-speed currents without the mooring sitting in the middle of it, you could avoid significant drag loading on the mooring and the resulting knockdown. But it depends on what sensor options you have available, and in some cases, there might not be a workaround.

Manatees can get into trouble when they are out of alignment in the water. But they can always make some corrections to keep things running smoothly. Similarly, when there’s an ocean current around, your mooring might get into trouble and get out of alignment in the water. But now you have a roadmap for making corrections to the design to help reduce knockdown and keep things running smoothly, too.

Try out the free version of ProteusDS Oceanographic. The Official Parts Library includes a host of DeepWater Buoyancy floats to make trials of different equipment easy to do. Read more and download the software here.

A huge thank you to Paul Devine at Teledyne Marine and David Capotosto and Dan Cote from Deepwater Buoyancy for collaborating on the example configurations. Also a big thanks to Chris Beck at DSA Ocean for running the analysis through ProteusDS Oceanographic!