Sloths may be slow, but they’re not stupid. They rely heavily on stealth and blending in with their surroundings. Now, frankly, relieving themselves up high in a tree would make a lot of noise and attract unwanted attention. So how do they handle the call of nature? It is risky, but they climb right down to the base of their tree and completely unload. And unload they do, as they can hold it for about a week at a time. Slow-moving as they are, it takes them a long time to climb down and back up again. Answering the call of nature is a big disruption.

For sloths, this kind of disruption is unavoidable. But not all disruptions are necessary. In fact, many of them can be avoided entirely. In oceanographic systems, instrument data quality is disrupted by mooring deflection. All moorings will deflect from the environmental effects of wind, current, and waves. In this article, we’re going to cover three elements of mooring deflection and how they disrupt data quality: 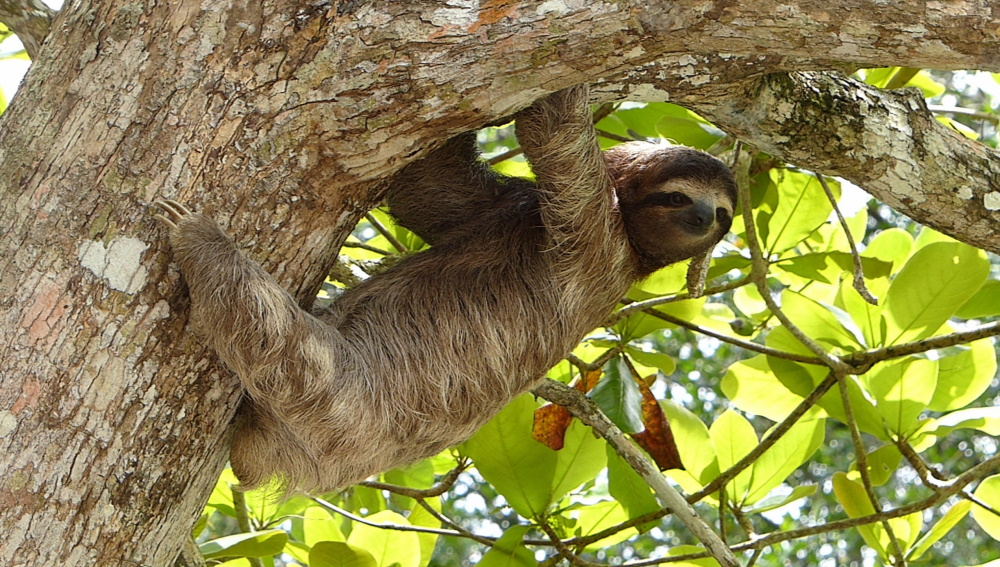 Knockdown is a vertical effect

Sometimes also referred to as blowdown or subduction, this vertical effect is a change in water depth that happens as the mooring deflects. When you’re working with subsurface moorings, it’s a significant effect to keep an eye on. The more the mooring deflects, the more all the sensors along the span of the mooring shift to a different water depth. It’s this shift that can give you a big headache in truly understanding what’s going on in the water column.

After all, there can be remarkably abrupt changes in water properties like temperature, salinity, velocity, and so on, especially with depth. It can be a real challenge to look over data collected from a mooring and establish just what exact water depth the sensors were actually at when they made the measurements. In addition, some sensors will have a depth rating, and they may be destroyed if the knockdown takes them too deep. But knockdown isn’t the only parameter to keep track of when you’re designing an oceanographic mooring. This brings us to the next point: excursion.

Excursion is a horizontal effect

This effect is a horizontal change in position that happens as the mooring deflects. Knowing excursion is quite essential to both surface and subsurface moorings. The big challenge is with excursion because you don’t know exactly where the sensors are in that horizontal envelope when they make their measurements. As the mooring deflects in the water column, it can be challenging to sort out exactly where the sensors are.

Without a lot of careful consideration, the data you collect from your mooring can only correlate to the entire footprint the mooring sweeps around. Ocean properties can change quite abruptly in the water both horizontally as well as vertically, so excursion is another crucial factor to keep an eye on. However, neither knockdown or excursion necessarily directly interfere with individual instrument measurements. This brings us to the third point: mooring tilt. 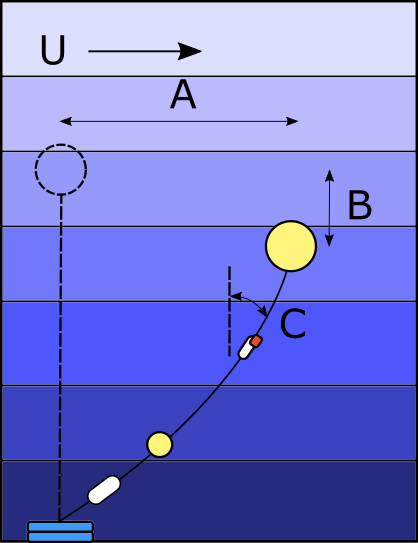 All moorings deflect from the effects of wind, currents, and waves. In a current with speed U, a subsurface mooring will have horizontal excursion A, knockdown B, and tilt C. These are relative measurements from the mooring profile in calm conditions.

Tilt is an angular deflection of the mooring

Since most moorings are often vertical in the water column when there’s no current, tilt is usually indicated as an angular deflection from vertical. Unlike knockdown and excursion, tilt causes an entirely different issue when collecting data.

It doesn’t affect all sensor types. But some sensors stop properly working when they tilt beyond a particular range. For example, an ADCP is affected by tilt. Most ADCP units simply can’t tolerate a tilt greater than about 15 degrees. Also, since an ADCP makes measurements at a distance from their location in the water, tilt affects accuracy. If disturbances from ocean waves cause dynamic tilt, it means the ADCP measures a large swath of ocean volume, and it reduces how precise the measurements are.

But how do you know what these effects will be before deploying the mooring?

This is a key question that we try to answer through the process of mooring design. These are often key parameters computed by a mooring design tool. Mooring design tools like ProteusDS Oceanographic calculate these parameters to show how the mooring performs. Nevertheless, the first step is understanding the terminology and concepts. Once you start working on your mooring design, no matter what tools or processes you use, you’ll know what to be looking for.

These are three fundamental effects you need to keep an eye on for the entire mooring when going through the design process.

Like every living thing, including sloths, the call of nature can be a disruption you can not avoid. But in mooring design, using the right tools, we can prevent disruptions caused by mooring deflection with careful and appropriate design.

With these concepts of mooring deflection in mind, you can start to account for them when designing oceanographic moorings. Read more on convenient times to adjust instrument placement in the design process here.