People that live in northeastern India use tangled foliage to speed their way through the jungle. But it takes a lot of patience. They can do this with certain kinds of plants, like the rubber tree. As you might expect from a rubber tree, the roots are quite flexible as they grow. It is this flexibility that is used to cultivate and direct the roots so they grow across ravines and streams in the jungle and take root on the other side.

The result? A living bridge that can last for a long time. By tending and adjusting the roots, the problem of getting around is solved with a systematic approach. 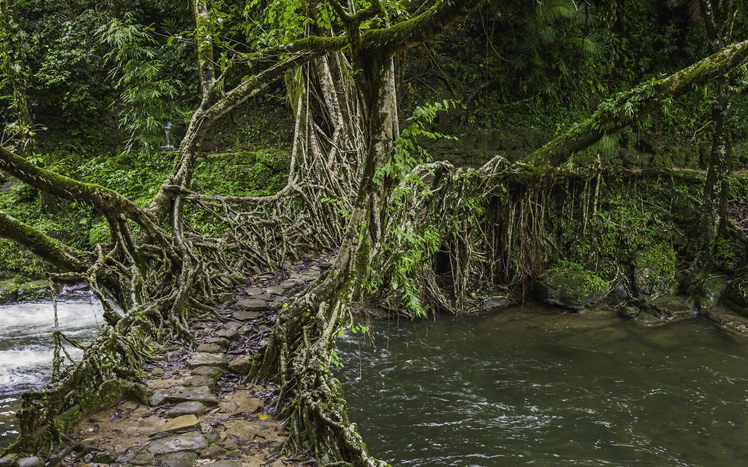 There are a lot of details in designing an oceanographic mooring. It can be easy to get lost in what often will be an iterative process. A roadmap is always helpful when you get lost. That’s what we’re going to talk about in this article: three steps in a systematic approach in assessing oceanographic mooring compliance using:

We will begin by addressing steady state in the first step.

This is particularly important for very long ocean moorings that can deflect a very long distance. It is this deflection that can have a drastic effect on reducing mooring compliance. A mooring that is almost stretched taut from these mean steady state forces will be at risk of breaking when ocean waves come along, which brings us to the next step. In the second step, we check what regular ocean waves will do to the mooring.

In this stage, the analysis picks up from where the first stage left off

The analysis starts with the steady state current and wind and deflected mooring profile. Now is when things get interesting: it’s time to bring in some ocean waves to see what happens to the mooring. But ocean waves also have a lot of parameters. Before we get lost in a vast number of load cases and long computation times, it’s a good idea to start simple. The simplest way to start is with regular ocean waves.

These regular waves are just sinusoidal ocean waves. They are a very simple starting point, but don’t let that simplicity fool you: they can still break your mooring very easily. This simple starting point is ideal because if there’s a problem with the mooring design, you can make adjustments, quickly re-evaluate step 1 again, and be right back to test with regular waves once more.

If the mooring is near the breaking point from the deflection produced from step 1, often just a short dynamic analysis with regular waves will show whether breaking loads are reached very quickly. But regular waves are very simple and don’t always accurately represent the kinds of ocean wave conditions at sea. This takes us to the third step in the mooring compliance assessment. In the final step, we look at with a wave spectrum, or irregular ocean waves, do to the mooring.

Ususally, when you look at the sea, the water surface doesn’t look very sinusoidal

In reality, it’s most common to see many of these waves of different sizes and wavelengths at the same time: in other words, a spectrum of ocean waves. It is this seemingly random water surface that makes what we call irregular ocean waves. But if they seem random, how can we use irregular waves to design a mooring? 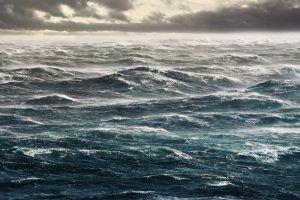 Irregular ocean waves in a storm

While the water surface at any instant might appear to have random waves, over a long period of time, a pattern emerges of typical wave heights and lengths.

However, this pattern is statistical. It isn’t something that can be so easily applied directly to a mooring design to test the mooring compliance. The solution to this is simple but the most time consuming step of all: you have to check what the mooring does in irregular waves over a long period of time.

This is because regular waves are sinusoidal, and you may see a pattern in the dynamic response of the mooring motion and forces emerge after only a few wave periods. In an irregular sea state, you may never see a specific pattern emerge. However, you will start to see statistical patterns emerge over time.

Mooring designers look for these kinds of events

They’re essential because how high the tensions are provides a more realistic idea of how robust the mooring compliance is and if the mooring will survive or not. And if it doesn’t survive in the analysis? Then the design has to be adjusted, perhaps with stronger or longer components or a different float configuration, and you go back to step 1 and keep going through the systematic process.

But aren’t you going to be looking at irregular wave load cases forever?

It’s true, the final step is not a fully deterministic design step to checking the mooring compliance. It doesn’t mean that you need to look at an infinitely long storm load case. But it does depend on a few factors like the magnitude of the storm, the spectrum type, how long the mooring is, and how it responds to the waves.

The most important thing is that a mooring designer has a way to run load cases that are long enough to see a statistical pattern of the peak loads emerge.

Let’s look at an example

The Southern Ocean Flux Station (SOFS) is an oceanographic mooring deployed in about 4km deep water off the coast of Tasmania. The mooring uses a 3m diameter surface buoy and over 6km of mooring line to provide the compliance needed to ride massive waves in the southern ocean. We configured the entire mooring in ProteusDS and ran through the three steps to determine maximum loads at the top of the mooring, next to the buoy. The general environmental conditions used for this example were 0.5m/s surface current dropping to zero after a few hundred meters. The wave conditions were 3m significant wave height and 10 second spectrum peak period.

In step 1, the steady state profile of the mooring was resolved from the current forces. The top tension of the line was 11kN in this condition. This was only a little higher than the static weight of the system without any current. The deflection of the mooring is significant but expected because of the very long mooring line. 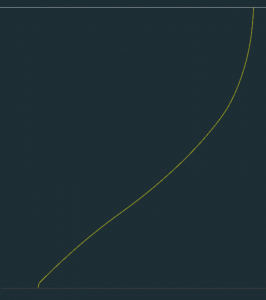 SOFS mooring deflection in steady current profile. This represents 6km of mooring line in 4km of water depth so the buoy and instruments are not visible

In step 2, we used the steady state profile of the mooring as the starting point. It’s a very crude approximation but we used 3m regular waves to represent the sea state condition. These loads were resolved after only a few wave periods so we had the results very quickly. The maximum tension was 13kN so you can see how the loads are increasing from the dynamics. But while it is dynamic, it doesn’t necessarily capture the peak loads caused by a more realistic irregular sea state. This takes us to step 3.

In step 3, we used a JONSWAP sea state with 3m significant wave height and 10 sec spectrum peak period. Running a few separate realizations of this spectrum produced an average 3 hour storm peak tension of 26kN. Note this was just an example to illustrate going through the steps with an existing mooring design and to show how the loads change in each step. In reality, the design may need to be adjusted depending on the needs of the design and strength of components in an iterative fashion.

Because the design process is iterative, it’s easy to get lost in the details

The systematic process is a roadmap

People living in jungles can use a systematic approach to cultivate living root bridges. It takes a certain amount of time before the roots reach the other side of a river or gulley, and only after the process is completed can the bridge be used. In a similar way, mooring designers need to follow a systematic process to evaluate their designs to ensure they’re safe and will survive.

Next step: evaluate your own mooring designs

DSA develops ProteusDS as a software tool to help evaluate oceanographic mooring designs. Mooring designers use this kind of systematic approach with a tool like ProteusDS to check their work and improve designs. Try the software and judge the results of your own designs. Apply for a free ProteusDS demo here.